Where does food waste come from?

Surplus food comes from a multitude of places. 30%-40% of food produced doesn’t even leave the farm. It is either plowed under by farm machinery, goes unharvested, or is harvested but farmers have no one to sell to. When the harvest is good large-scale farmers who contract with supermarkets and restaurants find themselves growing more food than they are contracted to produce. This food is considered a surplus and is not considered sell-able to supermarkets, which leaves farmers with a large quantity of food and no one to sell to.

Want to test your knowledge? Take the WWF Quiz on the Costs of Food Waste here!

In the United States, more than 41 million people are considered food insecure. Meaning, that they live in households with limited or uncertain access to adequate food. Indeed, estimates suggest that low income adults and children in the U.S. lacked the financial resources to afford the equivalent of more than 7.6 billion meals in 2015 (the most recent year for which data is available).

Maine has the highest rate of food insecurity in New England with 1 in 5 Maine children being food insecure and 1 in 8 adults. 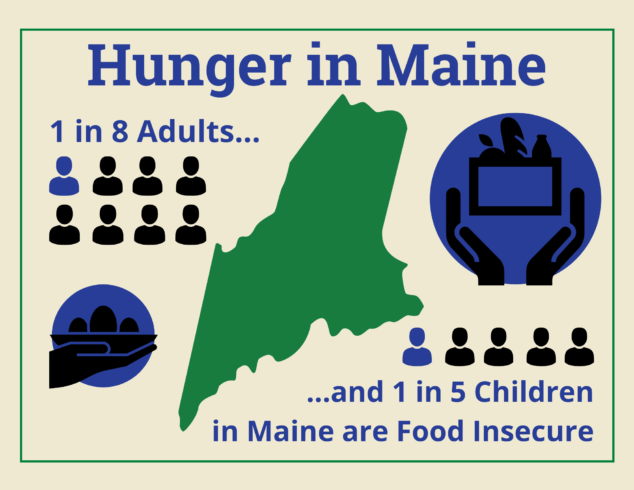 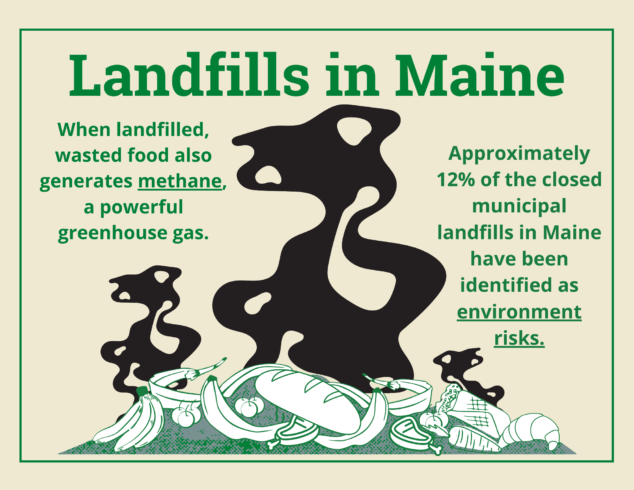 Indeed, up to 40% of the U.S. food supply goes uneaten every year. Along with that wasted food goes all the water, energy, pesticides, fertilizer, labor and other inputs that go into growing, shipping, processing, marketing and preparing it. When landfilled, wasted food also generates methane, a powerful greenhouse gas. Despite modernization and new standards, the risks associated with methane are still present.

According to research, approximately 12% of the closed municipal landfills in Maine have been identified as environment risks as defined by the Maine DEP. Even modern engineered landfills must be monitored over the long-term to safeguard human health and the environment.

…and the Savings of Mainers

Food waste has a significant economic impact. Approximately $218 billion USD is spent annually on growing and producing food that is never eaten (Isenhour, 2018). Furthermore, according to ReFed, food surplus cost the country $408 billion in 2019 alone. Of the total amount, 70% (or $285 billion) is food waste.

Along with the direct cost of food loss, there are related costs for water, labor, energy, and soil wasted on uneaten food.

For Maine communities, additional food waste has financial costs in town waste management and PAYT, and can increase tipping fees. 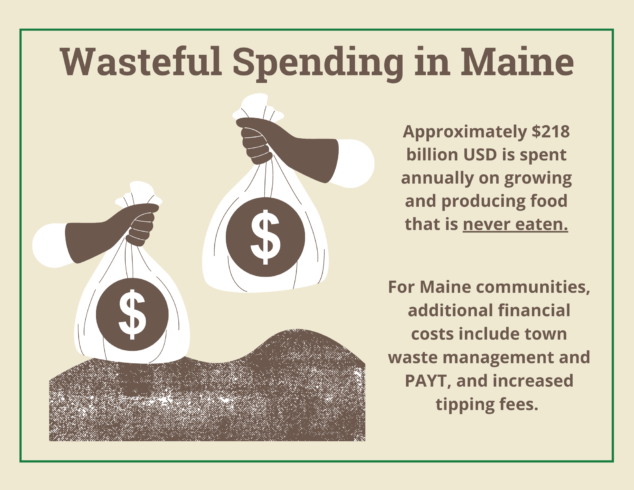 Be a Part of the Solution with Food Rescue Maine