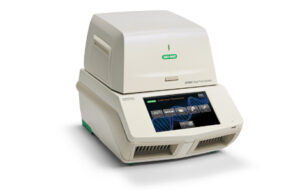 Quantitative PCR (qPCR) is a highly sensitive method for detection and relative quantification of eDNA.

A qPCR on a Bio-Rad CFX96 real time thermal cycler provides fast turnaround times on samples and relatively simple data to analyze and interpret. qPCR eDNA detection and quantification typically targets highly specific gene sequences that are unique to particular species. CORE’s eDNA Laboratory has qPCR assays for many fish and other taxa, and the list continues to grow. We are proficient at qPCR assay design and can work with you to meet your needs (see assay development). We are also able run qPCR assays developed by other labs. 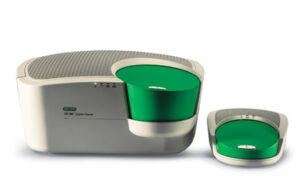 Droplet Digital PCR (ddPCR) is an improvement on qPCR, providing absolute quantification of eDNA or DNA copy number in a sample. It employs fluorescent probes, so assays designed for qPCR can convert directly over. The machine splits the PCR mix into 20,000 individual nanodroplet reactions, which are read as either positive or negative for the target. The proportion of positive results is then used to generate the absolute starting copy number of target DNA.

CORE’s eDNA Laboratory runs ddPCR on a Bio-Rad QX200 system for high-throughput and relatively quick turn around. Like qPCR, ddPCR is typically used to quantify specific gene sequences unique to particular target species. qPCR assays, including those developed by the edNA Laboratory, can generally be adapted to ddPCR.  ddPCR may also be used to quantify DNA copy numbers as part of library preparation for NextGen sequencing. 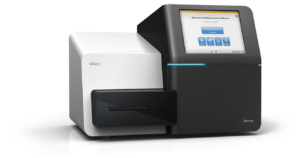 This technology, sometimes called high-throughput sequencing, delivers actual genetic sequence data for a large number of DNA fragments in a sample. It can be used for a wide range of applications, including sequencing genomes as well as for analysis of metagenomes (combined genetic material from many species). It’s most common use for eDNA is amplicon sequencing, or “eDNA metabarcoding,” which uses PCR primers to amplify DNA for a broad taxonomic group (e.g., bacteria, plants, fish). The Illumina MiSeq system of the eDNA Laboratory produces up to 25 million sequence reads per run. It’s considered the gold standard for eDNA metabarcoding work given its ability to generate longer paired-end reads than other platforms.

While the technology is fast in terms of producing many sequence reads, from potentially many taxa in the same sample, NextGen sequencing involves more steps and preparation time than qPCR or ddPCR. Rather than targeting a single or a few species for testing like qPCR or ddPCR, the MiSeq can give information about a broad group species at the same time. It generates many gigabytes of data that require substantial bioinformatics resources to process into species identities.

The MinION is a small, portable DNA or RNA sequencer. It has the capacity to perform ultra-long read lengths, with the longest reported continuous sequence read being 2 million DNA bases. This device can be used for metagenomics, but instead of sequencing short “barcodes”, longer reads are possible. While the MiSeq can output up to 25 million reads, the MinION is generally between only 7-12 million reads. The long-read capacity of MinION makes it also very useful for sequencing gene regions for species where data is lacking to help in the design of new eDNA assays.