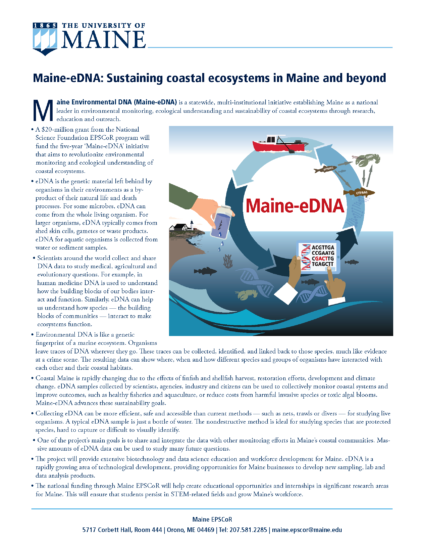 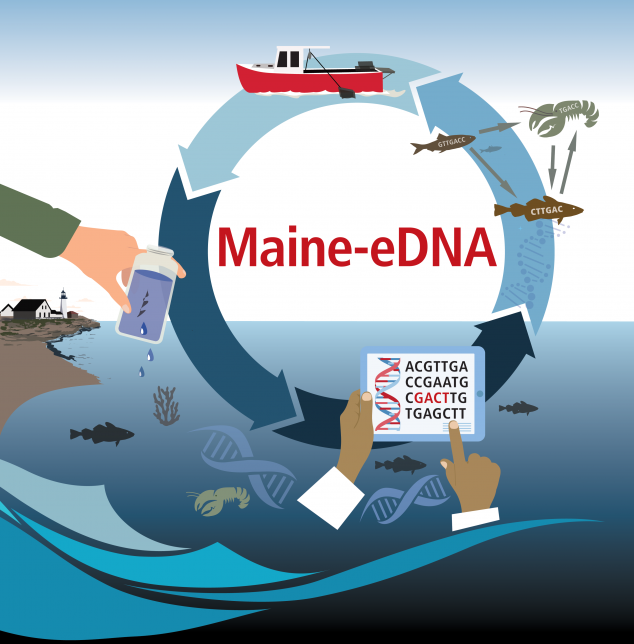 Maine-eDNA: Sustaining coastal ecosystems in Maine and beyond

Michael Kinnison:EDNA is short for environmental DNA. Environmental DNA is the small DNA fragments that are available in the water, soil, air, all around us. This environmental DNA comes from a number of sources. In some cases, it’s the whole organism when we’re dealing with microbes.

One of the interesting areas for environmental DNA that’s expanded the field a lot in recent years is, now we know we can also detect this environmental DNA from other types of organisms, macro-organisms like fish and invertebrates and so on.

Peter Countway:EDNA is a big deal because in a single sample, you can actually not just learn something about one particular species, there’s probably dozens of species in this environmental sample that are telling you something about how they live, where they live, how abundant they are in the ecosystem.

Up until this point, it would take a team of dozens of researchers to try to address all these questions.

Kody Varahramyan:Maine-eDNA is a multi-institutional partnership that will position Maine as a national leader in the understanding and sustainable use of coastal ecosystems. It addresses the statewide workforce needs in critically-important areas, including biotechnology, ecology, environmental and data sciences.

Shane Moeykens:If you want to go off into the Gulf of Maine and track groundfish, how do you do that? You’re typically dragging a net across the Gulf of Maine, and there’s a bycatch, you’re killing unintended species by going after that target species.

Michael:Now with environmental DNA, we have a totally new independent approach to allow us to quantify and detect these organisms. It’s like, suddenly after thousands of years, we have new nets. These new nets are capturing DNA.

Heather Leslie:It will be transformative for our state. It not only is a big deal, in terms of being able to train new workers and retrain existing workers to ready them for 21st century jobs, but this project also has the potential to help us understand how marine ecosystems are connected to our lakes and our rivers, and to the people who depend on all of those ecosystems here in Maine.

Darren Ranco:Maine-eDNA and Maine EPSCoR will support native students here at the University of Maine as well as native communities across the state; through student

research, public education, and projects that are important to the tribes and our native students here in the state.

The results of Maine-eDNA will help tribes make decisions about plant and animal communities well into the 21st century.

Shane:A Track 1 grant is $20 million of Federal funds coming into the state. These grants touch the entire state. They’re statewide by design and intent.

Shane:We’ll be doing outreach to about 18,000 students over the five years total. A principal focus of the outreach will be delivery of curriculum tool kits that will be developed by UMaine Cooperative Extension working closely with the Maine EPSCoR office.

Peter:I think the most exciting thing about Maine eDNA is that it finally brings together institutions that have similar aspirations to learn more about the environment, learn how the organisms are changing over time, how all of this biological diversity contributes to ecosystem stability, contributes to healthy ecosystems.

This is a real opportunity to adopt the technology, to build capacity within the state, and to essentially train up a whole new generation of DNA-based researchers.

Joan Ferrini-Mundy:I think Maine’s a perfect site for this work. First of all, our coastline is phenomenal and quite varied, which means it will have the chance to look at a host of different environments around the state.

Secondly, we have the research horsepower to do this here in Maine, both at the University of Maine with our partner at Bigelow and elsewhere, because we have researchers who are skilled in everything from genetics to marine science to artificial intelligence. We’ll need all of those areas in order to put things together and make this work for the State of Maine.

I’m especially excited, too, about the potential for partnership with the private sector, because we have a lot of businesses and industries in Maine that are interested in the data and research that we’ll be able to conduct with this project.

Supported by the National Science Foundation award #OIA-1849227 to Maine EPSCoR at the University of Maine.