University of Maine School of Earth and Climate Sciences

Edward Grew, research professor in the School of Earth and Climate Sciences at the University of Maine, has assisted an international team with obtaining approval for two new nanominerals from a mine in Tibet. In 2018, Ed Grew was invited to join the research team (Figure 1) led by Fahui Xiong and including Xiangzhen Xu, Paul T. Robinson, and Jingsui Yang from Beijing, Guangzhou and Nanjing in China;  Enrico Mugnaioli and Mauro Gemmi from the Center for Nanotechnology of the Istituto Italiano di Tecnologia in Pisa, Italy; and Richard Wirth from the Helmholtz Center in Potsdam, Germany.  Ed helped to develop and guide the proposals for the new minerals through the rigorous review and approval by the Commission on New Minerals, Nomenclature and Classification of the International Mineralogical Association (IMA). Ed co-authored the  journal article reporting the discoveries published November 2, 2020 in the European Journal of Mineralogy: “Two new minerals, badengzhuite, TiP, and zhiqinite, TiSi2, from the Cr-11 chromitite orebody, Luobusa ophiolite, Tibet, China: is this evidence for super-reduced mantle-derived fluids?”  The article and accompanying materials are available open access to the public online at https://ejm.copernicus.org/articles/32/557/2020/ejm-32-557-2020.html.  The “Assets” tab online includes rotating 3-D color images of the two crystal structures.

In recent years, new technology has made it possible to investigate and characterize very tiny crystals of minerals, and increasingly, new minerals approved by the IMA are so small that they can only be seen with an electron microscope. The new minerals studied by Ed Grew were found as inclusions in crystals of corundum extracted from chromitite ore from a mine in the Luobusa ophiolite in southern Tibet. Ophiolites are slices of ocean crust and upper mantle that are incorporated in mountain belts when continents collide as a result of tectonic plate motion. One of the great ophiolite belts of the world is in Tibet, where the Indian Subcontinent collided with the rest of Asia and pushed up the Himalaya Range.  The surface expression of this boundary is the Yarlung-Zangbo Suture Zone south of Lhasa, Tibet, along which a series of ophiolites hosts the largest economic chromite deposits in China.  The new minerals are interpreted to have formed in the Earth’s upper mantle by the action of mantle methane and hydrogen on basaltic melts in the Luobusa ophiolites.

The new minerals, named after Chinese geologists (Figure 2), have simple chemical formulas: badengzhuite TiP (titanium monophosphide) and zhiqinite, TiS2 (titanium disilicide).  Both compositions and structures have been previously synthesized in the laboratory, but this is their first reported occurrence in a geologic setting.  The nanominerals were characterized by 3D electron diffraction, which can solve the crystal structures of phases less than a micrometer in size. The illustration (Figure 3) shows the remarkable complexity displayed at the nanoscale – 6 different minerals altogether. The scale in the image is in units of “µm” (micrometers or one millionth of a meter, also called a “micron”). For comparison, in the current discussions of COVID-19 transmission, the cutoff between “droplets” and “aerosols” is that “droplets” are larger than 5 µm in diameter. A human hair is about 70 microns in diameter.

The results of this research contribute to our understanding of the mineralogy of ophiolites and deeply subducted crustal rocks and their exhumation back to the Earth’s surface. The remarkable complexity of the assemblage of nanominerals also demonstrates the fractal nature of mineral assemblages: no matter the scale, whether in meters or micrometers, an intricate and diverse mineral assemblage awaits discovery. 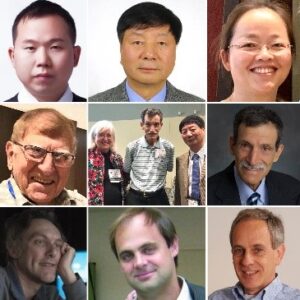 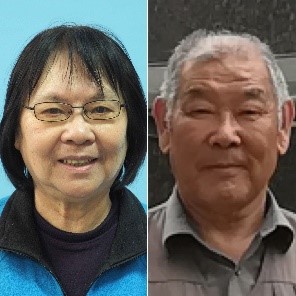 Honorees: Left:  Zhiqinite honors structural geologist Zhiqin Xu, born in Shanghai in 1941, Deputy Dean of the Chinese Academy of Geological Sciences, Director of the Institute of Geology, and Academician of the Chinese Academy of Sciences. Under the leadership of Dr. Xu, a large number of deep mantle minerals were discovered. Right: Badengzhuite honors Tibetan geologist Badengzhu, of the Tibet Ore Industry Co. Ltd., in Lhasa. Born in 1939, he discovered the chromite ore bodies in the Luobusa ophiolite in 1966. He conducted extensive geologic mapping and prospecting for chromite ores in the Yarlung Zangbo Suture Zone and associated ophiolites. 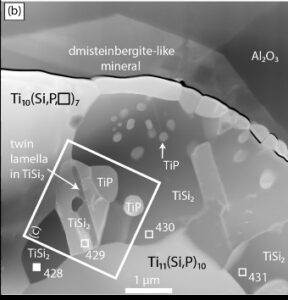